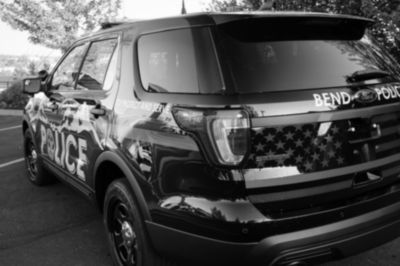 BEND, OR -- Bend Police are investigating the recent destruction of 32 trees, along with vandalism of 10 street signs in Northwest Crossing. Vandals also damaged signs at Summit High School and spun “donuts” in the lawn.

Bend PD’s Sheila Miller says it rises to the level of first-degree criminal mischief, “Public Works had estimated that total damage was at least $35,000. Although I’ve heard from people at the city that they are looking maybe at more like $45,000. They had estimated to us that it was about $1,000 per tree, and then $3,000 to repair or replace the signs.”

Miller says police received several calls Saturday morning about the run-over trees and signs. “We believe it’s a single vehicle. We think that the vehicle that did donuts on the lawn in front of Summit High is the same vehicle that did the damage on the side road. We were thinking perhaps the vehicle had an attachment on the front like a snowplow or a brush guard.  Could also just be a big, powerful vehicle.”

This type of destruction is far from routine, according to Miller, “This crime would constitute first degree criminal mischief. This is really quite significant and so while we see criminal mischief and vandalism with some frequency, this is an intentional act that kind of goes beyond what we typically what we see as a police agency.”